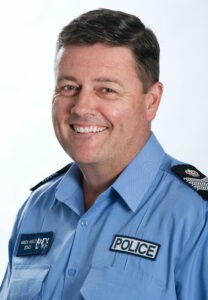 Mick has spent 32 years working on the frontline reaching the rank of Senior Sergeant and was elected to the role of Senior Vice President in November 2018.

Mick has been Acting President at the WA Police Union since February 2021.

In addition to his role as Senior Vice President, Mick is WAPU’s 24/7 On Call Emergency Director, available to provide assistance or guidance when required, and is the conduit between Members and WAPU’s Legal Team, police chaplains and Health, Welfare & Safety Branch Representatives for critical incidents offering operational support across WA. He is also chairs the Legal Committee and manages WAPU’s Operations Division.

Mick has always made himself available for the membership providing welfare support, along with industrial and/or legal advice whenever it is needed. Members recognise him as someone they can trust and who will speak out on their behalf when they are unable to.

In both his role as frontline officer and as a Director, he is cognisant of the constant pressures being placed on Members having to operate in an environment where stress levels are at an all-time high. He continues to push to improve overall working conditions, rostering practices and shift allowances for all Members and he understands his role as a Director is to fight to get better outcomes for every Member.

Throughout his eleven years on the Board, he has accompanied the WAPU Field Officers on visits to nearly all metropolitan and regional stations along with lock-up facilities, and understands the importance of a Director getting out and meeting Members to gather a true perspective of the unique challenges placed on each of them.

In addition to his role with WAPU, he also holds positions on both the WA Police Legacy Board and Police Families Assistance Council.