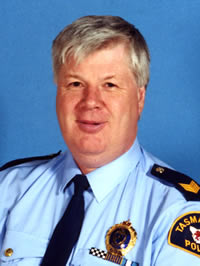 Leon was a member of Tasmania Police for thirty three years. He joined as a Junior Constable in April 1969 and retired at the rank of Detective Sergeant in October 2002.

Leon performed duties in various areas including General Uniform, Traffic Division, Liquor and Gaming, and for the last 19 years of his career in the Criminal Investigation and Crime Management Units.

In 1974 Leon served with the Australian Civilian Police on Cyprus as part of the United Nations Peacekeeping Force.

Leon was the inaugural President of the Police Federation of Australia from 1998 – 1999.

Upon his retirement Leon was elected as a Councillor of the Derwent Valley Council where he resided.  He also served on the Tasmania Police Review Board from 2004 – 2011, the Northern Territory Police Arbitral Tribunal 2004 – 2011 and the Tasmanian Parole Board 2003 -2017.